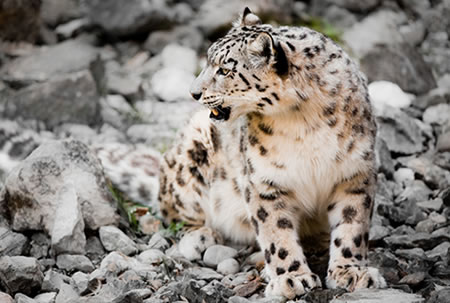 Adopt a snow leopard and receive

Snow leopard’s are quiet creatures that are happy to spend time alone when hunting. They are amazing athletes, and can jump up to 15 metres in one bound! They have a big habitat to mark out as they hunt in up to 1,000 square km, and love to travel under the moonlight to new destinations to hunt.

You may have trouble seeing me in my natural snow covered habitat, as I blend into my surroundings so well. I have to be on my guard as my soft grey coat is highly prized by poachers, meaning there are less than 4,000 of us left in the wild. My food sources are running low because humans are destroying the places where I live and hunt. I’m now an endangered species and really need your help to survive, so please adopt me and give me a chance to see another winter.

A snow leopard spends most of their days resting and recovering from a hard night of hunting and foraging. They will den up or find a comfortable warm rock to sleep over, from a position that commands good views over the nearby terrain for safety. Days are by far the easiest and most relaxing part of snow leopard’s schedule.

Snow leopards are carnivores and live in steep rocky terrains found well above tree line often where snow lies even in the summer months. In drier climates, such as desert terrains, they can survive off the moisture found in its prey, rather than require a natural source of water.

They prefer to attack from high, leaping down on their prey, with a swift bite to the back of the neck but unfortunately though many of the snow leopard’s hunts will end without a kill. Despite this and due to large reserves of stamina, they can survive for upwards of two weeks in-between meals. It is because the snow leopard is at the top of the food chain that in its natural habitat it is relaxed and fears no enemy.

When a male and female snow leopard meets, their courtship can last upwards of eight days, but once over they will go their separate ways and likely never meet again. It is estimated that only fifty-percent of the adult male population may be able to find a mate during the year.

Cubs are born between ninety and one-hundred days following courtship and the female snow leopard will spend lots of time looking after and nestling the cubs so they can grow stronger. It is traumatic for the mother that will need to find food for her cubs, but with no-one to look after the cubs while she is away, she is unable to stray too far from the den. Because of the needs of her cubs, she will need to find fifty-percent more food than she would normally need to gather, and due to these hardships, she and her cubs may not survive because of this.

The world’s Snow Leopard populations are under threat as the natural habitat in which they live comes under attack from competition and conflict between farmers that wish to graze their animals on the land the Snow Leopard depends upon for its food and exercise.

Snow leopards live solitary lives in vast unpopulated regions at the top of a fairly pure food chain on the roof of the world. For many years it seemed that nothing would endanger their species. Red Listed by the International Union for Conservation of Nature, their only predator is man.

Conflict and competition over grazing have come from herders. Domestic herds deplete tiny plants and sparse grasses which the snow leopard’s food supply needs. Overgrazing by human livestock drives away wild sheep, boars and ibex. Humans also supplement their diets with birds and marmots, hares and land birds the leopards use for food. When the snow leopard supplements his failing diet with domestic prey, he is subject to herder revenge. Confronted, he doesn’t run, relinquishes his kill, and is easy prey for a trap or a gun.

Any predation on flocks is a serious loss to impoverished herdsmen whose average income is a few hundred dollars. Besides revenge, snow leopards die by fur poachers and also are sold in parts to illegal dealers who substitute whiskers and bones, very similar to a tiger’s, for traditional Chinese medicines.

What can we do to help the snow leopards?

About the snow leopard

Snow Leopards (Uncia uncia) live high in the mountain ranges of Central and Southern Asia, typically at altitudes above four or five thousand metres, ranging in the north from Russia and Mongolia down through China and Tibet into the Himalayan regions of Afghanistan, Pakistan and India. The snow leopard has adapted remarkably to its extreme environment to become one of the most specialised of all land predators. Although the total area of its range is extremely large the actual areas in which the cat is found are relatively small and notably fragmented. In addition to the thick coat which protects them against the cold and large furry paws that allow them to tread comfortably over snow, they have a large thick tail which provides a balancing role over hilly ground, and may be curled up against the face in cold weather. Snow Leopards can leap further than any other cat, reaching distances of well over forty feet in a single bound. Extremely strong and agile, they are capable of preying upon animals three times their own size. Their main prey is that of wild sheep such as Bharal (Blue Sheep) and Argali, goats, including Markhor and Ibex. Other prey taken includes Musk Deer, marmots as well as various species of hare and birds.

The inaccessibility of their geographic range means that limited research has been done over these reclusive and solitary felines in nature, and they have seldom been captured on film in the wild. Fortunately their remote location has also enabled the cats to return from near extinction in recent times and evade poachers who treasure the leopards’ beautiful fur coat. Because of the inaccessibility of much of the snow leopards habitat the exact numbers left in the wild is unknown, but some estimates place the figure as low as 4,500 to 5000. The decline in population has, in the past, been mainly due to the snow leopards much sought after fur and although the animal is protected in most areas, local hunting and trapping still remains a threat. As with the Tiger, the snow leopard is still hunted for its bones, which are commonly used in many Chinese medicines and this, along with the enforced decline of many of the cats larger prey species, places continuing pressure on the remaining numbers of snow leopard left in the wild. Because of this, the snow leopard is listed in the IUCN’s Red List of Threatened Animals as Endangered and it is probable that without continuing action by many of the world’s conservation organisations they may become extinct in the wild.

Despite the many adversities, the beautiful Snow Leopard is still hanging on, but only just! 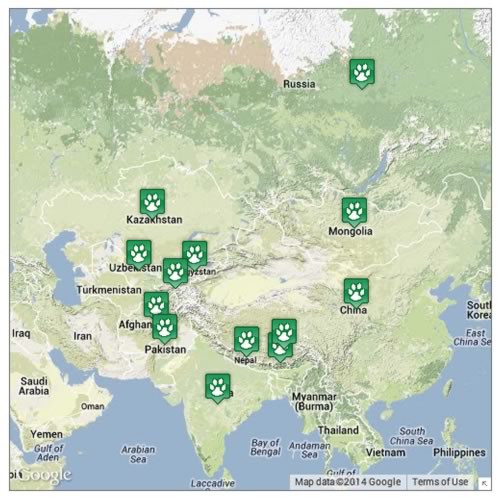